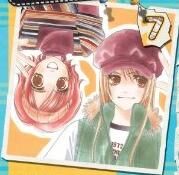 Careful! There might be spoilers for those who haven't finished reading up to volume 7.

This wiki isn't finished yet, so if anyone wants to contribute, then go right ahead.

Gatcha Gacha is a shoujo manga by Yutaka Tachibana. The story centers around Yuri Muroi's life in high school. She had just been dumped by her 13th boyfriend when she stumbles upon Motoko Kagurazaka being asked out. Soon after, she meets Takahiro Yabe, a boy in her school who believes he can only seriously date Motoko. He's known as a playboy who goes out with multiple girls, usually forgetting he's going out with them and goes ahead and starts dating another.

Sho Hirao, the school's student body president, really loves Yuri. Yuri only sees him as a friend and is completely oblivious to his feelings for her.

Latest News on the last volume[]

According to the Anime News Network site, the release date of volume eight, the last volume in the series, will be on November 2nd, 2010.

Community content is available under CC-BY-SA unless otherwise noted.
Advertisement